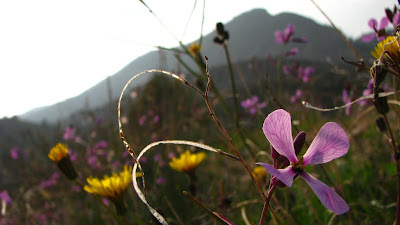 Marlene and I took the poorly wheel to a motocycle cum bicycle mechanics a few streets away. They took it from me and told me to return at 6pm. After buying some provisions Marlene left me at her flat and went to play Bridge for a few hours. As well as catching up on couch surf requests, I tried learning some spanish, motivated by my need to collect the wheel. The young guy who served us was not there when I returned, Marlene had warned me that the older guy was pretty grumpy and unhelpful. Sure enough my terrible attempt at asking if the wheel had been fixed went over his head, the only think I understood was no comprende. Luckily I saw the repaired wheel, so the international sign language of pointing to it and saying quanto did the trick. 12 euros later and the bike was back on form ready to depart tomorrow. We went to a bar and had some wine, then returned to sleep.
After a hearty breakfast, I said goodbye and got going. It was overcast, and I went inland to traverse the hilly headland, climbing slowly up the N332 to 200m.

The road snaked its way through enormous gorges with a railway line precariously following a contour around the cliffs. Up we went until we reached a plateau with the occasional evidence of civilisation dotted about on the barren landscape. I pressed on through Teulada and Benissa before descending a great long hill down to the high rise landscape of tourist ville. Back on the coast the weather was fine again, but beyond the sprawl of tourist shops, Mc Donalds and small businesses there was little to see. The road undulated past Calpe, Altea and eventually skirted around the famous Benidorm, a metropolis of high rise apartments resembling a hazy salmon and cream coloured Manhatten. There was no desire to explore it, and I went inland to get away from the package holiday madness. 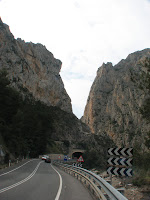 The road climbed steeply up the mountain side, the 250m climb was relentless in the heat but it was comforting to enter the tranquil beauty of the vast arid hills. I passed through Finestrat and turned down a closed road for 6 km, weaving its way up and over the hills until I found Rosalind's little bungalow up a dusty little track. What a place! Rosalind defined a content life of solitude. She had lived here for five years, the last two alone, and she was quite happy to exist alone on the hillside. She had solar electricity, rain water to wash and cook with and spring water to drink. I marvelled at the landscape in the afternoon sun, then she lit a fire and cooked me some pasta and chorizo.

I listened intently as she talked about her rich life, her travels around the world, her year in South America discovering her amazonian roots, her four sons of two marriages and the stresses and strains of love and separation and the complicated arrangements of her grandchildren. We talked about Bristol where she lived for many years, about the role of today's men and women in family, and last but not least, football which she surprisingly loved. Rosalind was a truely inspirational woman.
I said goodbye and thankyou after porridge, and descended to Villajoyosa to return to my coastal journey. The sun was intense but it wasn't too hot, the going was cooled by a gentle breeze. I cycled through the hilly arid landscape and on to Alicante. As I passed the cacti and aloe shimmering in the sun, I cast my memory back to the piles of snow I had passed on the hills of Somerset, the icy blizzards of Niort and the strong winds of the Canal du Midi and how these thighs of mine had got me here. They are still going strong, stronger now and

I have to admit I am quite amused by their shape. Not quite Belleville Rendezvous legs but not far off.
The traffic in Alicante was frantic, but I followed the route through the centre despite it being barricaded off from traffic. The empty dual carriageway took me to the seafront where enormous yachts were moored up and everybody was out parading the street.

There was a cycling event and a load of cyclists out, BMXs, families and children, mountain bikers, glamorous girls on folding bikes, young guys on retro fixed gear bikes and then me, a lonesome lanky grubby guy on a heavily laden vintage steed having ridden 2200km. I chuckled to myself as I cruised past, nobody noticing. The traffic re joined me as I left Alicante and descended onto a great shimmering plain with another high rise resort. I stopped for a pizza and continued on past huge salt flats before climbing gently to La Marina, my destination. I met my hostess,

Viviana at the very busy, luxurious and successful campsite she owned, and we walked to her beautiful house where her Spanish husband, Tony, family and friends were. 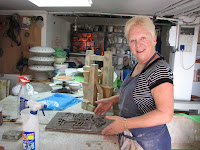 Originally from Belgium, she had lived in Spain since the sixties and spoke five languages. The sheer luxury of the house, swimming pool, many cars, caravans and pool was an indication of the campsite's success. She showed me her ceramic studio where she created a huge variety of beautiful pieces, and after a conversing with her friends with her as the interpreter we had dinner, I planned a long leg of couch surfing, wrote this and went to bed. The following morning after beakfast, she took me to the campsite shop where she insisted on filling a bag of goodies for lunch. I said goodbye, and as I cycled along I thought about the contrast of my two last hostesses. Both were so kind, yet there was something about the generous hospitality of a person who had made such a successful business out of hosting that gave me goosepimples. I felt very honoured to receive such an exclusive treatment from the Deckx family. 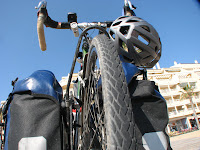 The journey today was another very sunny one, on past more tourist landscape and over a gently undulating terrain. The road was being widened, so I had a lane all to myself as it was closed off but more or less complete. 10km on and the two carriageways became busy with traffic and I was ushered onto a cycle lane. It didn't take long for the gratitude to turn into frustration as it was about the most stupid cycle lane I had ridden on. Navigating in and out of junctions with sharp corners and street signs in the way, down and up hills to roundabouts instead of straight on the road, and negotiating big kerbs made this path more dangerous than the road. So I got back on the N334 and pressed on to San Javier. 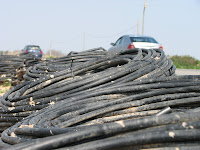 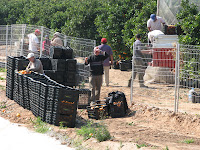 I then left the busy road and took an F road straight past more farmland. It was populated by lettuces and irrigated with black pipes, the occasional hut and run down house. I stopped for a coffee in a very one-horse bar and got the cheapest cafe con leche so far. The big hooped earrings and dubious mullets and dark skin of the clientelle made me suspect that this was a land of immigrant farm workers. I pressed on, and the last 30km was hard going with a steady headwind. Eventually I got into Cartagena where I am now, killing another few hours before my host Pako finishes studying at 8.30. 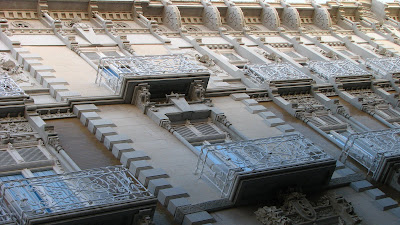