near the end the adventure begins

In case some of you are confused about the goal of this voyage, Ceuta in Morocco is still the final destination I intend to cycle to. Rather than cross the Costa del Sol to get there, I decided to see a bit more of Morocco, so I will ride the north Moroccan coast from Melilla to Ceuta which is 20km more and five times the climb of the original leg. Just in case you thought I was cheating. 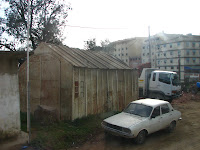 So far I can say that I am so glad to have done this. It has taken me no time for my spirits to be lifted no end by the people of Morocco. The french stage was so cold I was pretty much alone every day, and although plenty more people were out and about in Spain, I passed by pretty much unnoticed. Morocco is the complete opposite.


After last writing in Almeria, I went down to the port and bought a ferry ticket. The boat departed at 11.30pm and I tried very hard to assume a comfortable sleeping position across two reclining seats. The crossing was calm and quiet, but the night's sleep wasn't particularly good. Like so many of the other Moroccan passengers I caught my best nap on the floor. As the sun rose behind a pretty drab sky we arrived into the Spanish province of Melilla. It was early and I had little inclination to explore the town, so I went and found the frontier. The transition from Europe to Africa occured in 50 meters, orderly queues descend into fighting chaos as cultures filter through the barricades and past serious looking border police. 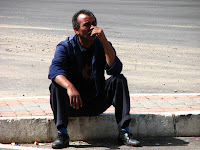 After filling in an immigration form I am issued with my stamp, past the guard and into the land of Morocco. I knew to expect a sensory overload, but it's always underestimated. The sights, the sounds and above all the smells are overwhelming. I also forgot how much attention I attracted, and being early in the morning after not much sleep I wasn't yet ready to face this, so I withdrew some Dihrams and got going towards Nidhar. The dusty dual carriageway took me south around the hilly peninsula as I passed countless smiles and greetings of Salaam alikum by the men of the roadside watching the world go by. I went straight through Nidhar still unacclimatised to the overwhelming attention, but I was getting very hungry so I rested up at a little tea stop out of town. I ate six eggs, a baguette and my first of many delicious mint teas while watching a guy dunking a lorry inner tube in an old bath tub to find the puncture. 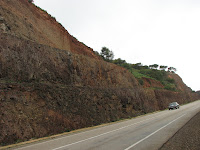 Suitably recharged, I got back on the N16 and rejoined the Mediterranean. The road had been recently rebuilt with EU funding, and the carving through the gentle foothills of the Rif mountains was immense. I wondered what kind of machine could slice through rocky hills so straight and cleanly on such an enormous scale. The earth walls revealed the geological periods of sediment of these ancient hills as I cycled past them relatively effortlessly, for the gradients were fairly easy. On I went, I realised that there were very few built up areas on this coast, just small settlements of farmers and fishermen. The traffic was incredibly light for a national road, possibly one vehicle passed me per minute. Every other vehicle here is an old Mercedes, handed down from from a 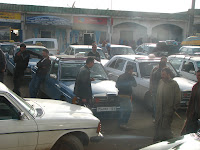 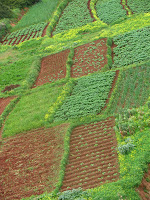 European owner and cherished and repaired indefinately here. Th is is a land where things get fixed rather than discarded. I stop for another mint tea and am invited to share lunch with another customer: Yet again I am the centre of curiosity; here people want to know what it's like to be a young Engish guy, what philosphy we have if we don't worship our god. I carry on, and it dawns upn me I should think about where to stay. There is nowhere particular on the map indicating a guest house is likely, so 90km along I stop at a tea stop, meet the customers and use my judgement whether they seem sound enough to trust if I ask them if there is a place to stay nearby. I do this about three hours later after doubling my arabic vocabulary; learning about each other's lives, talking about the mad world we live in and the volatile situation with muslims and the west and how they just want to coexist just like most of us. We share the tranquility of this rural beach with the strangest looking cliffs behind us. 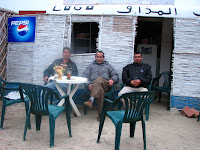 The customers leave and bid me the warmest of farewells; saying how honoured they are to have met me, and Mohamed the owner of the tea hut lets me stay in the security of his hut behind the shutters, he will wake me at 8 and cook me breakfast. So after another load of eggs and baguette and some cake for lunch, he insist I pay only what everyone else would, about £3 for dinner, breakfast, countless cakes and teas.
I get going and the sky is even more grey than yesterday. An hour in and I take refuge in a marble lined classy cafe as the heavens open. I put my waterproofs on and continue along, playing duel with a tractor full of farm workers. They are highly amused that I'm quicker on the downhills and they overtake me on the uphills. I pass Ajdir and the gradients get fierce. My road goes inland but I decide to cycle 10km further to the big town of Al Hoceima. I realise the amount I withdrew at the start; 100 Dirhams sounded like a lot but was about £8 and I only had 30 Dh left. As the hills of the detour got steeper and steeper I hoped there would be a bank. Sure enough there was, and after a huge steak and chips for lunch I decided to find a hotel and recuperate. It had been 3 days since I stayed anywhere with washing facilities.
Posted by henryrolls at 09:31