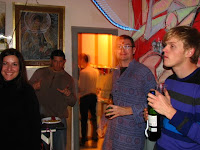 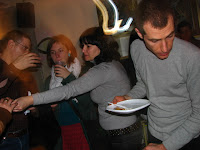 Valencia is great. Kyle and Ana are great. What was meant to be a day´s rest turned out to be four. The first night I arrived we went to a couch surf party where Kyle did some projections. The theme was supposed to be Indian, though one would never guess. It was the most international gathering I have been to, I met French, German, Spanish, Estonian, Canadian, Romanian, US and Hungarian people, and then gave up meeting any more when the flat filled. It was very confusing knowing which language to try and speak, though I was happy to chat away in French with Julie, a young french girl studying furniture restoration. We drank lots of rum and coke and ate a buffet of food broght along by everybody, then at midnight the crowd was ushered out and we helped clear up. Kyle poured some more drink when we got back, but my 400km in four days made me quite dizzy and incoherent. 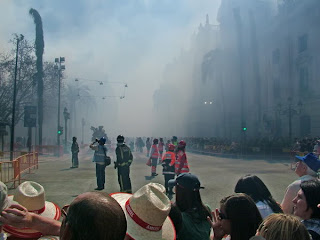 So the next few days were spent hanging out, seeing the city and meeting up with Julie and her German friend Anna, watching really budget zombie films and talking VJ. We go and see (or should I say hear) the mascleta, a daily explosion of fireworks for five minutes in the main square. It is all part of the Falles, a Valencian celebration of St Joseph in which enormous paper and wood puppets are burnt in the streets. They represent satirical topics of the moment, people unfortunate enough to be chosen are characatured in colossal inflammable structures up to five stories high. It is a pity not to see the main party next week where everybody from children to grandparents are out throwing bangers, processions work their way around the streets and the city is alive with noise. I pity the poor startled animals who must think there is a war going on. I confess that my time here was a major distraction to my mission and made me feel a bit transient, it made me warm to the idea of learning Spanish and spending some time here, but not just yet. First things first, some more pedalling to do.
So on Thursday I get back on the road, legs feeling recuperated. The weather is cool and sunny but there is a headwind. Out of Valencia I realise I must not take the souhwesterly direct route I had made, but detour out to the headland in a southeasterly direction. The GPS chose a route shaped like a question mark, 150km in all, so I predicted if I keep going straight along the coast it´ll be 100km. 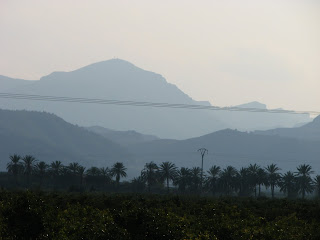 It's a steady flat ride past a the Albufera lake where rice is grown, and then on along the coast past the beautiful blue haze of some impressive hills to the right. The foreground of orange crops, mile after mile has now become repetitive like the vineyards of France, it becomes apparent what a massive industry oranges are here. I stop to pick up a stray one on the road and it is perfect. I press on past Gandia, only stopping at a supermarket where I stop for lunch. I'm right about the straight line, my concern was whether or not I would have to negotiate a headland with winding hilly roads or face a massive detour. But 100km and a headwind was still a hard day and the sun was setting as I reached Denia. 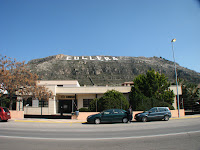 Built around a castle up on a big rock, Denia appeared to be a classy tourist town, inhabited by many retired English and Germans. My host, Marlene was one, having moved here after devorcing back in North Germany. The children were grown up and she had chosen a new life in a sunny climate, with plenty of likeminded friends to make. She entertains herself walking in the mountains, playing Bridge and learning Spanish. After squeezing the old bike and luggage in the lift and showering, I sit down with some wine and some spaghetti bolognaise and we chat away. It is apparent that the previous evening, Marlene hosted her first couch surfer and did not have a good experience. The guy had made her uncomfortable and when she asked him to leave he had refused to. Only when the police had been mentioned did he leave but he stole her spare sim card, lent to him out of goodwill. It is a shame how much of a dent on one's confidence of trust one individual can make to hosts, Svetlana had mentioned she thought that Couchsurfing had grown too big for its own good. Still, Marlene was very pragmatic about it, the fact that his profile had existed for 2 years but nobody had witten a good reference is enough to be suspicious for the next time. 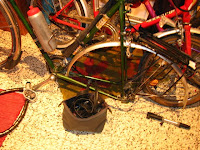 Hopefully Gerhard will find it very hard to find a host again with his new negative reference.
I woke up today ready to press on with a fairly hilly 73km to Villajoyosa. However, after fixing the puncture I got at the end of yesterday I noticed that the back axle had broken. I knew I should have bought a new wheel in Bordeaux! We went to a scooter\bike mechanic who said to return at 6pm, so alas I am stuck here for another day. Slow progress recently.
Posted by henryrolls at 04:24