I realise that I have been spoilt for hospitality. My Cartagena host, a young Mexican student called Pako was quite busy, so I was happy to pass the time before he finished at school, then cook us and his two housemates some food while he continued integrating radio frequency calculations. The housemates were Polish and German, and seemed more interested and offering of their Sangria. I really can't complain though, I just know I have been extremely spoilt. I got breakfast in a cafe, and got ready for a big day, 110 km and over 1200m climbing, west down the coast to Aguillas. I think it's too hard to describe the ride today but it was definately the most beautiful, traffic free yet gruelling rides so far. About 20km were on a rocky coastal track, and the finale was a 600m climb in the beautiful Cabo Cope y Puntas de Calnegre. I'll let the following photos do the talking... 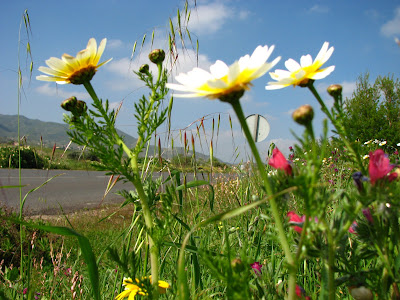 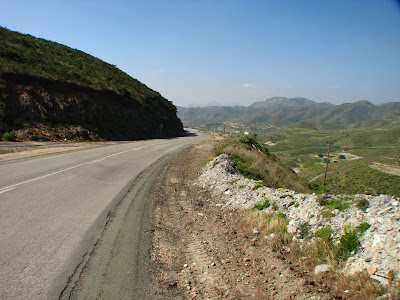 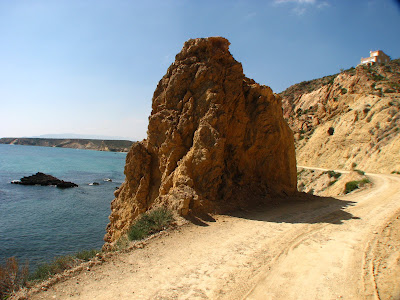 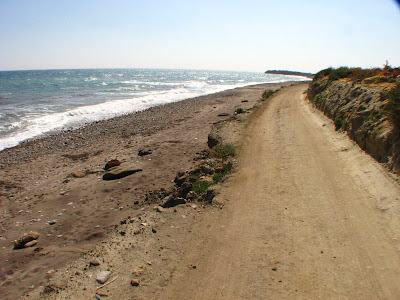 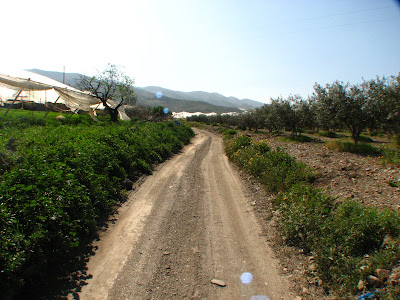 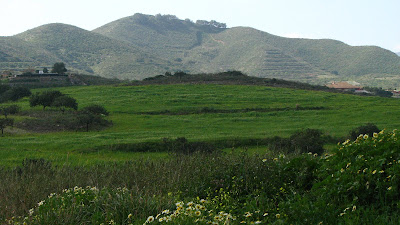 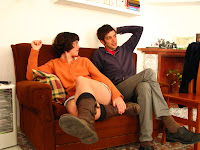 I arrived at Aguillas, had a pizza and met up with Camille and Frederick, my hosts for tonight. French and US respectively, they were delightful company, but I was probably not the best of company as I was so exhausted. Fred told me about his complicated immigration situation, how he had remained in France after his marriage with a French woman had ended, and he had been deported from France after refusing an offer from the authorities. He was a perfect candidate for working for the government as a spy, apart from his political stance which meant now he was in Spain, teaching English on a tourist visa. 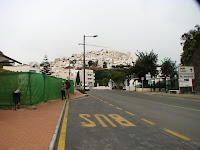 I left relatively early and realised my ride to Mojacar was tiny in comparison to yesterday´s, and with a strong tail wind I was there in no time. The sun was fierce today, and I was happy to go slowly in order to recuperate. The last leg however was a very steep hill into this ancient hill fort. The warren of whitewashed buildings have seen an occupation of many different tribes over it's long history. Greeks, Moors, Spanish and most recently English it seems. My host, David was born in Merseyside, but had never considered Britain his home, having raised a family in Denmark for the most part of his life. We went to a bar and did a very British pub quiz with some other English. Our team came second and we left. David was tired of this community and wanted to go on to Thailand for his next chapter. 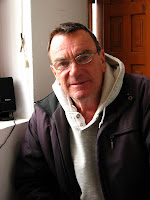 We walked down the steep hill and after filling my bottles with warm spring water I said goodbye and got going again. I would break up my journey to Almeria and take David's advice to go and wild camp in Las Negras, where I may find some other young travellers. I warmed to this idea, since France I have felt a lot more alien to the locals and other more 'mature' holidaymakers, and I am sure this is not just due to my language barrier. The going was tough as the road worked its way through a desert landscape. David had told me it had been used for many spaghetti westerns as a fake Nevada or other US wilderness. Although not a long distance, the climbing was fierce today, and eventually I descended into Las Negras. 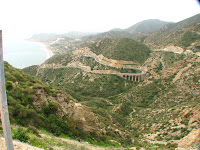 I cased the joint for evidence of wild campers and younger, more alternative travellers but there was nothing, just a 6 euro site with designated pitches, entrance barrier and noise curfews- not my idea of camping, but an option if I found nothing else. Eventually I found a hippy and asked him of this spot I had imagined. Victor, a Czech guy told me it was not Las Negras but San Pedro, a mere 3km along the coast, but the only way was by boat or a very rocky track which he doubted I could ride the last part. It didn't put me off, and after buying some dinner I pushed up an extremely rocky track and cycled around the headland on a terrain most mountain bikes would have never graced. 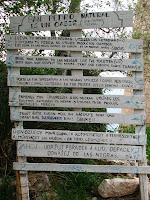 Victor was right about the last bit, carrying a 35kg bike over it was hard enough, but off in the distance I knew what I could see would make the whole chore worthwhile. It was like a paradise, a shanghri la. A small abandoned beach hamlet with a beautiful sandy beach. Cut off by the modern world with no tarmac connection, the sandstone structures were rebuilt using found materials. 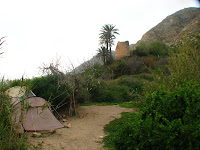 The odd tent was pitched in amongst a terrace of beautiful wild gardens, vibrant with herbs and flowers. I knew I was in a dilemma, I was going to be sucked into this place. Getting the bike back up the path was going to be a mammoth ordeal, yet I had come with no food and needed to remember my mission. I met a few Germans, one of whom had been here every winter for 7 years. He showed me the abuse the elements gave his tent, a couple of months of sunshine and the nylon disintegrated. We had a couple of beers in a makeshift bar an entrepreneurial Austrain ran, a tarpaulin over the terragce and some small warm cans for a euro each, then I went to sleep in my beautiful little pitch. 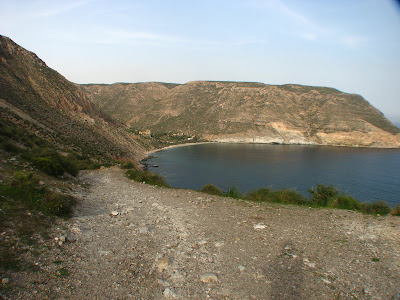 I packed up and carried the bike and the bags in two stages, 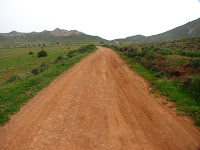 I was exhausted having not even ridden anywhere yet. The 3km took close to an hour and I picked up a coffee, breakfast and lunch and got going. Yet more spaghetti western backdrop, and the route took me off tarmac and up a red earth track steeply up into the mountains. It was a route the GPS had chosen for me so I didn't know what to expect, but it was ideal. A hard climb up and then 40km of ever so slight descent through the plains of Nijar, populated by hectares upon hectares of tomato poly tunnels. This was my landscape for the day until the civilisation built up to Almeria. I am ready to change my lansdscape and culture now, and continue the last leg along the North coast of Morocco.
Posted by henryrolls at 10:27