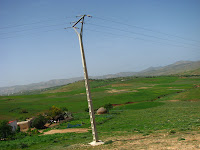 I set out early today as I was going to attempt to cover 200km and a climb of 2700m in two days. The journey was on the N2 through the centre of Ketama and was more or less 100km climb followed by 100km descent. After the Moroccan breakfast of eggs, olive oil, bread and olives I left the hotel and descended out of Al Hociema and upthe steep hill towards the mountains. The climb was relentless and already the sunwas fiercely beating down on me. Even bottom gear was hard work on the thighs as the steep dusty road passed by at walking pace, the lorries roaring past. The support of the locals and their 'ah! super sportif!' chants kept me going. The gradient reduced and the road snaked its way up a vast valley, little clusters of houses were scattered about like pastel coloured hundreds and thousands, some were way up the hillsides up remote tracks. In the foreground I saw donkeys and bellshaped hay stacks and yet more men, sitting about and smiling at me. I rested at another tea stop with its french speaking curiosity and continued on. 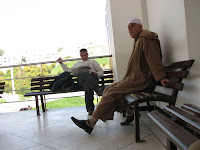 It was pretty obvious that 100 km of uphill was going to be more than today, I planned to do about 60-70km and then 140 tomorrow. But my 10kmh speed in the baking heat was proving to be hard work, and I had developed a pain in my chest. While working out what to do, a coach overtook me and stopped a few metres in front of me to let passangers off. I had no time to ponder upon a decision, my mind was made to go and ask the driver if he was going to Ketama and he would take my bike. A few moments later and 50 dhirams poorer I was in the comfort of a seat, with plenty of time to ponder on whether I was cheating. The coach hurtled along the winding hairpins and I watched the landscape change to rocky ridges and fir trees. We stopped at a few more towns. 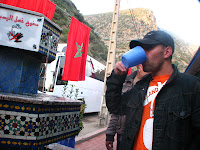 This is the land of the Rifians, berber people who have fought occupation from Portugal and Spain until last century when their land became part of the Moroccan kingdom. As we budge through a busy market, they trade their animals, friut,vegetables and spices with each other in a way that I'm sure has little changed in a millenium. It is a lush green land which gets a lot of annual rainfall. 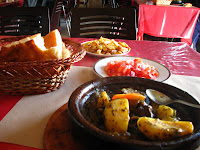 A passanger gives me an orange and points to two collapsed houses. This winter's excess of rain has been catastrophic for some. The road jams as the traffic negotiates a hastily repaired section of the road. Many parts of the road have been badly damaged by landslides. After a delicious tagine for lunch we pass Ketama, the summit, and 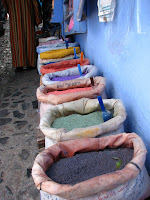 I consider when to get off the coach. It is nearly 3pm, so the remaining downhill is too much to do today. I wait until 4 when there is still 50 or 60km to go, I should get to my destination by dark. I get on the saddle and get going. The way is one of the most amazing but hairy rides I have done. The gradient is very gentle as the road follows the contours of the enormous Rif, up a small section and then down, down down. I am constantly trying to keep myself from being pushed off the tarmac as the Mercedes race past, often waving in support despite nearly killing me. I have little chance to admire the stunning mountains in my peripheral vision as I snake down the valley. I pass Bab Bezoot and level out, pedalling harder and slowing down as the road works its way up to my furthest point away from home, Chefchaoen. 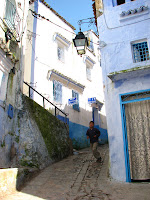 As the sun begins to setand my legs begin to ache, I see the lights of this charming peaceful city approach. I go straight up to the old Medina where I find Pension Souika, a beautiful old hotel in the centre catering for backpackers. I unpack and relax, straight away I meet my first friend here Diego. This is the first time I stay at a place full of other travellers in the whole trip. It is a refreshing experience. 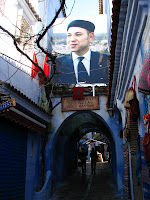 The next two days were complete relaxation, strolling the blue washed walls, up the hill to the mosque, eating lots of food, hanging out at Oussama's sandwhich shop,meeting French German US and spanish backpackers and feeling a little bit smug.
On my last night before departing, I am woken at about 1am by the light switched on and some loud Moroccan voices. I eventually open my eyes and am surrounded by four police officers and the Spanish guy in the bed next to me in hand cuffs. Dumbfounded, I watch as they gather his posessions and take him away, leaving us in peace. Naturally the following morning I want to know what had happened, I am relieved to hear that it was a mistake and he was later released. Apparently he shared the same name as a Cuban wanted by interpol for murder, and that his check in to the hotel's computer had rang alarm bells.
Posted by henryrolls at 06:13